Dr. Ada Mui is a Professor of Social Work at the Columbia University School of Social Work.   She is a graduate of Brown School of Social Work at Washington University in St. Louis, (MSW, PhD). She has extensive social work practice experience with older adults in Hong Kong and the United States.  Her gerontological research and publications have been on cross-cultural gerontology, productive aging, older volunteers, age-friendly communities, self-care, family caregiving, medical care, community-based long-term care, psychological well-being, depression, religiosity, immigration, and acculturation experiences among older populations from diverse backgrounds.

In the United States, Dr. Mui has been recognized as one of the leading social gerontologists in cross-cultural research. She is a Fellow of the Gerontological Society of America and has been the recipient of many significant awards and scholarships (e.g., the Fulbright Scholarship Award, the Fulbright Senior Specialist Award, the Busse Research Award from the Pan America Congress on Gerontology, and the Outstanding Mentorship Award from the Gerontological Society of America). In addition to her work at Columbia University, she is a Faculty Associate at the Center for Social Development at the George Warren Brown School of Social Work, Washington University in St. Louis.  Internationally, she has been an Honorary Advisor at the Sau Po Center on Ageing at the University of Hong Kong; she is an Honorary Professor of Social Work at Beijing Normal University, Beijing Youth Politics College, and the University of Hong Kong, China. In Taiwan, she is a Research Fellow at the Social Policy Research Center at the Taiwan University.

In China, Dr. Mui has been involved with teaching and training of social work faculty, students, and social work practitioners in community for over 15 years.  In 2016, she had collaborated with Tsinghua University Faculty of Social Sciences to conduct a China nationwide social work education curriculum conference in January.   She had invited eight faculty members from Columbia University School of Social Work to be the speakers for this conference.  In June, 2016, she had collaborated with Institute of Population Research at the Peking University to organize another national conference to address in-depth gerontological social work education content, curriculum, and field education models.

Dr. Mui’s  current research is based on the World Health Organization Multi-Country Study on global AGEing and adult health (SAGE).  The SAGE Study examines health and well-being of adult populations in six countries: China, Ghana, India, Mexico, Russian Federation and South Africa.  Her research has been on productive aging issues and health services utilization among rural and urban elders in China and India.   Since meaningful social engagement is associated with healthy aging, Dr. Mui studies correlates of volunteering, social participation, civic engagement, and later life employment among older populations in US and in China. 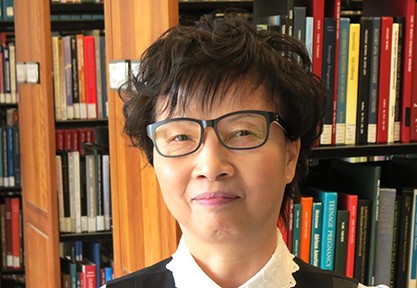